A collection of patterns for knitting charming hats and caps for babies. Some are quite complicated, and a few are decidedly odd. Most, however, are cute and seem doable for the average accomplished knitter.

The publisher provided this book as an ARC in exchange for an honest review. Release date 2 September 2014. The holidays may be over, but I've got a backlog of Christmas books to read!

Louise Reynolds has written a sweet novella about family and romance. Unsatisfied with her current relationship, Shelby unexpectedly returns to her childhood home, and in the end, gets a better welcome than she expected.

The publisher provided this book as an ARC in exchange for an honest review. Release date 2 December 2014. Gobbleville resident Anamazie wants to be a star. And she becomes one.

The problem is that at no point is Anamazie seen to be working for her success. It all falls in her lap, apparently through no action of her own. (For example, Anamazie is edged out for the win on Gobbleville's Got Talent, but she's talent-scouted for Gollywood anyway.) The book's stated message is "You can do anything you put your mind to," but the one I actaully heard was, "Don't worry, success will fall into your lap if you want it really bad."

Illustrator Mattia Cerato has given the rather flat story a lift. The images are bright and saturated, with lots of fun background details.

Two Old Fools on a Camel Ex-pat Brits Vicky (the author) and Joe Twead leave their Spanish village to teach English for a year in Bahrain. Their adventure coincides with the Arab Spring.

This was quite an interesting little book. I always enjoy these fish-out-of-water sort of memoirs, but the overlap with the political uprising was a bonus. As if the spoiled students and strange American teachers aren't bad enough, Vicki and Joe must face the dangers of a city under martial law and in danger of invasion!

Listen to the Squawking Chicken Listen to the Squawking Chicken is an intriguing memoir of growing up in Canada and Hong Kong – with The Squawking Chicken for a mother. The cultural differences are both mesmerizing and horrifying, but always fascinating. Elaine Lui's childhood made me cringe and howl with laughter by turns. Recommended for any North American who wants a look a a completely different mother/daughter relationship!

The publisher provided this book as an ARC in exchange for an honest review. Release date 22 April 2014. Alan (author) and Lorna Parks move from Britain to Spain to retire and raise alpacas. They are prepared for nothing about the experience.

This is a sweet, amusing little memoir. I enjoyed reading it. Although the alpacas aren't the main focus of the story, anybody who's contemplating getting into raising any sort of large animal ought to read it!

The decision to publish the book without any photos and instead ask the reader to purchase an entire other "book" of snapshots with captions is well calculated to irritate the reader (at least this one). Yes, it's true the photos aren't expensive, and I surmise that the decision was made in the interest of keeping digital delivery charges down. However, black and white, low-resolution snapshots could have been included with the text for a modest increase in file size. From what I saw in the preview of the photos, they aren't professional quality images that are going to suffer from display at low resolution. And the story would have been much enhanced by a few photos of the farm, the animals, etc. This is, of course, the last of the Stephanie Plum books, with all the mayhem, automotive damage, and slapstick that implies.

That's as far as I can go without venturing into spoiler territory. The subtitle says it all: Bacon and Eggs to Mac 'n' Cheese, Bibimbap to Chocolate Chip Cookies--53 Irresistible, Unexpected Recipes to Make in a Waffle Iron.

Author Daniel Shumski was been waffling away over at Serious Eats for over a year now. The question the book asks is, "What can a waffle iron do besides waffles?" The answer is surprisingly diverse - just about the only thing missing is soup. I'm looking forward to trying the Waffled Croque Madame first!

The publisher provided this book as an ARC in exchange for an honest review. Release date 26 August 2014. I have a friend with three children under the age of four. While visiting, I happened to peruse this title on her kindle.

Now, I get that the right book can help with a lot of things, and I know that bath time is a struggle for many parents.

I hate to pan a book, but there's got to be something better than this. The artwork is simplistic and unimaginative. The text is uninspired.

"Can I play? he asked his Mom.

"Can I play? he asked his Dad.

"Can I play? he asked his sister, Cathy.

He didn’t know who else to ask. Served Hot is a sweet, novella-length title set in Portland. Robby, a barrista, serves a vanilla latte to David every day. Will Robby be able to turn his crush on David into something more?

This was a fun read with a satisfying conclusion. There's enough dramatic tension to make the story interesting without going over the top into "DRAMA!" which I appreciate, and there are a few steamy scenes. I'm looking forward to reading more titles in the series, and more from author Annabeth Albert.

The publisher provided this book as an ARC in exchange for an honest review. Release date 3 March 2015.

Every Day is a Holiday I came across George Mahood's first book (Free Country) available for free on Book Bub. Free Country starts with two guys setting off to travel the length of Great Britain with nothing but their underwear. When I saw he had a second book available, I had to have it. This is not the sort or storytelling you can pass up.

Every Day is a Holiday is George's journal of six months celebrating the weird and inexplicable Days that clutter the calendar. He squeezed in as many as possible per day, every day, which makes for some awesome juxtapositions. I promise, you do want to know how a guy who works from home celebrates Ride Your Bike to Work Day. Author Mary Lee's text and illustrations are ridiculously simplistic. The art is fuzzy and not well reproduced. Some of her other books look to be of better quality, but I wouldn't recommend this one to anyone. 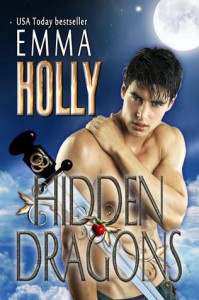 This is the fourth title in Emma Holly's Hidden series, which I am enjoying quite a bit. It was pitched to me as erotica, but I'm enjoying it as a fantasy series (if a very steamy one). The stories are set in the city of Resurrection, created by the fae as a pocket of reality between our world and theirs. Resurrection is filled with all sorts of fantastical beings; a pack of werewolf cops features prominently in the stories so far.

In this volume, half-fae Cass returns to Resurrection after living in the mundane world for many years. Her high-school crush (a werewolf) turns out to be just the guy to help her survive fulfilling her totally unsuspected destiny.

Favorite Montana Recipes: With Bits Of History Stirred In This book was a gift from a family member who found it at a thrift shop, and boy am I glad! It's circa 1994, and full of the sort of recipes I like: unpretentious stuff at home on the ranch table or a church potluck buffet. There are canned cream soups called for, and packets of onion soup mix, and whipped topping. But there is a definite Montana sensibility: the occasional presumption that the cook will be grinding their own flour or cornmeal, ingredients like elk and pheasant, a preponderance of cold-hardy vegetables, recipes scaled to feed a harvest crew. I'll definitely be cooking from this book.

Most recipes are accompanied by a snippet of Montana trivia or history, which made for a fun read. There are also hand-drawn sketches of Montana subjects on about half of the pages. It's too bad this title is out of print; it would have made a great gift. Hopefully author Patricia Scott Black will consider a fifth printing. Thorn is the debut novel from fantasy writer Intisar Khanani, based on the fairy tale of the Goose Girl. It's listed various places as YA, but I don't think I'd peg it as such. Certainly, it could be enjoyed by younger readers, but it has themes and complexities suitable for adults.

Khanani takes what is often a simple fairy tale and makes it into a three-dimensional novel. Princess Alyrra has mixed feelings when she is betrothed to the prince of a neighboring kingdom. Her marriage will provide an escape from her family, but she has learned that those closest to her are not necessarily trustworthy. When she is betrayed during her journey, she must choose between embracing the freedom and anonymity of a life she has made for herself, or taking up the mantle of the Princess once again with all it's emotional and physical dangers and responsibilities. Thorn's voice is distinct: formal, almost distant or detached, which is appropriate for telling her story. I'm looking forward to reading more books from Khanani.

A collection of short stories

A book published by an indie press

A book by or about someone that identifies as LGBTQ

A book that takes place in Asia

A book by an author from Africa

A book that is a retelling of a classic story (fairytale, Shakespearian play, etc.)

A collection of poetry

A book that someone else has recommended to you

A book that was originally published in another language

A graphic novel, a graphic memoir or a collection of comics of any kind

A book that you would consider a guilty pleasure

A book published before 1850

A book published this year

One book may only fulfill ONE challenge.

Re-reads DO NOT count towards fulfilling challenges.